Of late, my rather strange and serpentine reading habits have yielded up examples of what might be called literary hybridities, where genres and styles work to subsume or coalesce. Of course, such genre bending is not even remotely new but it would seem that the sheer scope of possibilities arrived at by willing and gifted literary contortionists can usher in some sublime sense of the original. As someone who bristles at the notion of writing book reviews I simply offer abbreviated reader reactions to this group of disparate works. It was not my intention to include a collection of authors I know personally but as I make it a practice to read and support the work of colleagues, friends and acquaintances, that’s the way it worked out. In no particular order then… 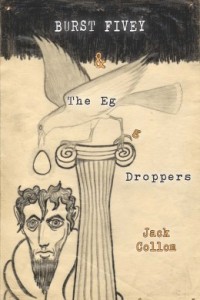 Graphic novels notwithstanding, I’m always interested in how poets combine their craft with other art forms, as I am wont on occasion to do with music. Here we have a slim volume combining Collom’s youthful drawings (1957) while in Zeitlang Germany with two newer poetic works. Upon receiving the book I was instantly reminded of the old City Lights editions of Kenneth Patchen’s painted books with their Klee-like drawings sometimes interspersed with snatches of verse. No stranger to Collom’s work, I have often thought that he is too firmly placed in the Eco or nature poet camp as there is an Avant-garde mind with all manner of linguistic playfulness often at work. This offering is no twee coupling of word and image as the verse breathes spatially across the drawings with a meditative sense of humour and artfulness. Burst Fivey in particular, with its homages to Shakespeare and Hopkins as well as the author’s beloved birds, shows great formal enterprise with a series of acrostic sonnets. Collom states that he wrote a line a day and one can feel the sense of articulated purpose with as well as between each burst of the poem.

Another instalment of Basil King’s life-long work to ponder, the first since I was honoured to edit his large 2011 Skylight collection, Learning to Draw/ A History, previously serialised in various small presses and online zines. Here the painter-poet, unlike Collom, is sans appended image and must embark on an ekphrastic poesis of sorts, which is a naturally automated state throughout his work where all is captured and processed through the artist’s roving eye. As always, the author presents a pictoral collage shimmering with colours sifted from anecdotal memory, his unique sense of history rendered as internal mural. I am particularly drawn to meditations on old Saxon churches and his lingering fascination with the Green Man, a shadowy figure sometimes caught in the half-light of the painter’s brush-strokes. I’m also intrigued by the very notion of a life’s work, an on-going and intimate Leaves of Grass, seeping through years of experience and to find shape in lingual form. It is a colossal undertaking, for which only the chosen are suited.

As it was my distinct privilege to work with the poet on the publication of Interlocutors of Paradise, a sumptuous collection of five short atmospheric meditations (also Skylight), I was keen to peruse what has been couched as a follow up to that work. Again, we are privy to the whispers found in conquered spaces through three sequences of provocative, symbolist-tinged prose-poems, each breathing some sense of spiritual purpose that turns faintly political by echoes. As Iain Sinclair has done before him, Anderson takes us down the Thames estuary with an old colonial sense of conscience, where tributaries are fogged with the vapours of old ghosts. I’m particularly drawn to Anderson’s use of the page as vessel; old papyri with distinct fragments of hieroglyphic wisdom – briefly liberated from ancient tombs. Such is the obsequy, once full of fractional secrets but now ebbing through the porous retainer of memory. 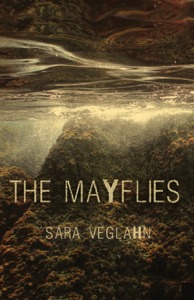 As a submarine soul weaving his own sluices I was drawn to this beautiful little book of a fresh-water life cycle. After being submerged into the impressionistic cover the next thing to notice was a ringing endorsement by Selah Saterstrom, no stranger to sumptuous fictional hybridities, which proclaimed it “a book of saturations, the cloud-sea of parts that constellate into birth charts that we jump through.” Indeed there a sense of genesis that deftly weaves the eternal with the temporal, the universal with the miniature, as one enters the primal waters. But to experience this work as some romantic pastoral complete with idyllic chimeras of water embalming a mysterious chorus of ladies would be a gross act of dilution. For the river also offers its strange sediments, its bubbling bog froth, its storehouse of haunted treasures and punishing currents. Reading the book requires emersion, a willing trip into faery, and a submission to the undulations between what is dream and what is real. The Mayfly, sometimes referred to as Naiad or Nymph in their immature stages, are transformational insects – as are we all upon the great River. This ecology in miniature whispers a primal echo logos to those that wade to the depths.

As I have found out for myself, there are no limits to what a mixilating group of short stories can become. A veritable championer of Flash Fiction, Nancy Stohlman embarks upon a strange and irreverent series to situate the reader with death-row volunteers, stewardesses, Avon-lady stalkers, magicians and homunculi just for starters. There are some flashes to be sure but these stories aren’t mere formal reductions or glib plot encapsulations come about by editorial stripping. This is a strange and enticing grouping of vignettes where skeletal structure is ruled by omission or by the vague projections of causality. We traverse momentary realms from the surreal to the absurd to the mythopoetic, often propped up by illogical scaffolding or some labyrinthine state of limbo. There are hints of Kafka, Hoffman, Borges – even more contemporary types like Jonathan Carroll or Angela Carter perhaps. But among these twisted miniatures runs two seams that hint at some totalizing purpose; the first being a set of blasphemous biblical paraphrases and the second offering the on-going presence of the Red Fox. This is an odd and intriguing juxtaposition but the returning fox, although via unconventional treatments, seems to offer the same totemic reverence often found in Native American and Scandinavian myths. So often cast as the trickster, and here infiltrating a world of literary tricks, the presence, although tragic, is a grounding one.

A Child is Being Killed
by Carolyn Zaikowski
(Aqueous Books)

I must confess it took an act of will to jump into a book bearing such a harsh and hardly welcoming title but just a few pages in I realised that this is precisely the point of its being written. The reader enters the world of Shrap to become imprisoned by those five haunting words – which makes sense of back cover words of Bhanu Kapil, another wonderful progenitor of hybrid worlds, that it is a “devastating and courageous new novel.” Indeed, I have to commend Zaikowski for the beautiful but bruising impact this novel had on me – for it shaped my consciousness and lingered in my dreams for quite some time afterwards. The author understands how to write from the wound but not in a typical ‘tear-jerker’ way that enacts some glib narcissistic martyrdom. The reader is coerced as an unwilling voyeur of abuse – the recipient of shrapnel – to become embroiled in a Poetics of entrapment as an acute teenage girl is sold into sex slavery by her father. That such a doomed soul, haunted by rats, ghosts and shadowy threats, seeps into the soul in a way that slowly and softly bludgeons shows the craft of this writer. Writing then becomes the escapist’s craft, through fantasy, through imagination, through the reinvention of memory and the artful reversal of fortune. At times I was reminded of the “rememory” of Morrison’s Beloved, where the book itself becomes the spectre and the power of killing words must find a way to cleanse.

I particularly enjoy books that posit the question “What is Writing?” What happens when you blend or mutate its genres and forms, manipulate the structures? Novel in itself here we have the recasting of three novels into poetic fragments, offering stripped down skeletal forms. A literary puzzle of sorts it would seem pertinent to have some knowledge of Wilke Collins’ novels, The Moonstone and The Women in White, as well as George Gissing’s Eve’s Ranson, or to know that this these Southern and Northern English Victorians wrote works that displayed a particular affinity for the plight of women, who at this point did not have suffrage rights, the right to sue or own property, but nonetheless contributed hard labour to Britain’s growing industry. But despite only having passing knowledge of Collins’ ‘sensation novels’ (although lavishly praised by T.S. Eliot) or Gissing’s vast output of some 23 works, I was captivated by Robinson’s treatment via the auspices of sheer literary experiment. For this does not appear to be the sort of Victoriana reverence one finds so often in the world of historical fiction – of which there are many current examples – but rather obscure prose-poem vagaries, combining both artful reduction and redaction, as one pares and whittles away wood with a knife. It constitutes an extreme experiment in editorship, cutting something meaningful down to the spindles and seeing if it still props up anything of worth. Any writer can add layers but how many can strip them away so that the white of the page becomes as bare but intricate bones? 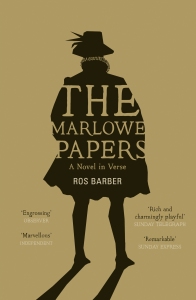 As the writer of a subversive book on Shakespeare’s oeuvre I am always intrigued by other challenges to the sacrosanct bard. But where I only hinted at the author controversy in stage whispers Ros Barber confronts it full-on in this wild blank-verse noir thriller. A serious Marlovian, Barber seeks to fashion a coherent authorship model but through a bold new form that combines the epic poem with the modern novel – boldly threaded with the tricky stitch of the Iambic Pentameter. Of course, the Elizabethan period is already rife with conspiracy theory, espionage, counterfeit, gamesmanship and a vast Underworld of occulted knowledge so having Marlowe fake his own murder and whisk himself away to the continent in order to ghost-write the finest literature of our age is perhaps the easier task of the author here. Unlocking stubborn secrets is akin to conjuring the dead and Barber seeks to bring about both by a bold use of poetic form that itself isn’t just counterfeit and pastiche in its aping of Elizabethan style. This is the rub – and it’s interesting to try and gauge how authentic one should be in trying to bring a bygone period to a fresh readership. Indeed, Barber admits to trying “to avoid cod Elizabethan” in striking the precarious balance. In truth, the distinction is helpful because the verse, although daring, does not reach anywhere near the level of Tudor prowess and may put some readers into thinking the author only capable of Elizabethan-lite. It’s also brave to try and convince by use of an epic form, which often suggests some mythologizing intent – and it would be interesting to know how many Marlovian converts come of this bold effort.

(Those interested in hybrid literatures might want to check out the following works published by Skylight Press:  Immortal Jaguar by Hugh Fox, Diary as Sin by Will Alexander, Learning to Draw/ A History by Basil King, Faversham’s Dream by Anthony Duncan, The Passenger by Richard Froude, The Cult of Seizure by Rikki Ducornet, Lud Heat by Iain Sinclair, Interlocutors of Paradise by Martin Anderson, The Groundlings of Divine Will by Daniel Staniforth, Suicide Bridge by Iain Sinclair, …And Egypt is the River by Michael S. Judge and Geordie’s War by Alan Richardson)