The Groundlings of Divine Will by Daniel Staniforth 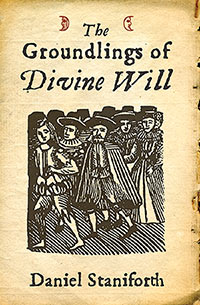 “We are the collective pronoun not to be named; the sacred amalgam, the response harbingers around the fringes of refinery. We are informers and fetishists, sycophants and revolutionaries, the pliant in the trenches of experience, the silent mummers in supplication to the stage. We have been given Divine Will and we have the ears to hear, eyes to behold; the blotters of the wordless, drinkers of the unseen. ’Tis a free will that teeters between points of exactitude and fancy that nuzzles the boundary between the blessed and the damned. But do not try to seek us out for we exist outside of time, the round of sleep that bounds all actionable life…”

Thus begins The Groundlings of Divine Will, a mysterious pamphlet written largely in corrective second person to the Master of Revels by a shadowy and dubious collective, the groundlings of the pit. But who are these people that stand in the stalls of the Globe, the Swan, or Blackfriars for a mere penny? A penny for their thoughts! What are their responses to the plays and how do they differ to those that have come down to us through time? Are we faced with a secret society, a heckling choir, decoders of dangerous secrets, or just a rag-tag collection of driftwood souls that seep up to the Shakespearean stage? And from whence does this manic and subversive gospel come? Are these the synoptic thoughts of co-aspirants or just another clever ruse in the murky name of literature and scholarship?

The author of Weaver in the Sluices and Diddle (poetry and fiction respectively) is responsible for this controversial, self-reflexive, ironic and humorous response to the way that Shakespeare is so often taught in contemporary academia, in some sort of attempt to reclaim the immortal bard – but for whom and for what purpose? The works of ‘Divine Will,’ as he is referred to throughout, have been confined to a vacuum, and almost biblically so in how the scripts have become wilfully detached from their moorings of time and place. In this hybridised long ‘Proem,’ Daniel Staniforth goes to absurd lengths of reattachment, gladly playing havoc with the swirling dictums and counter-dictums of his time, gleefully seeking to subvert the tautological authority of the neck-frilled academicians over the historical groundlings of the pit.

Elements of satire, parody and burlesque are interposed as hagiographical substitutions made for the purposes of irony and deconstruction. The groundlings seek to be reheard as a singular voice, often with strange and uncomfortable utterances that might unhinge the traditional reader or passive viewer of Shakespeare’s plays. Allegiances will be tested, conspiracies will be aired, and any notions of orthodoxy will be put to the rack. Through his precocious groundlings, Staniforth explores the esoteric possibilities of stage as temple, drama as ritual, script as liturgy, and theatrical response as spiritual supplication and discipleship. But religion is wholly uncatholicized and the pit opens to receive all manner of dark variants, suppressed theologies, reformative doxologies, cunning fraternities, magical sublimations, and the folk-soul whispers of a pre-Augustinian Britain. Where lie the allegiances of Divine will in this swirling miasma?

The reader, should they be willing, will be initiated into the amalgamated and timeless world of the Groundlings – a world of alternative histories, unbracketed dualities, demoralized proclivities, and dedoxified modalities. They will “have ears to hear” the invective gospel and share in the divine will. Already many adherents have sublimated themselves – fellow playwrights, writers, poets, theoreticians, alchemists, astrologers, mystics, clerics, necromancers, academics, sycophants, commoners, mendicants, madmen, heretics, and of course, Umberto Eco. The Groundlings of Divine Will simply illustrates how discourse, rhetoric and that grandiloquent power of oration serves as the strongest definition for our collective place in history – or some such pomposity.

Staniforth is not afraid to dip into the cosmic trough and find magical pearls among the swine; the flashing twists and barbs of his heretic wit had me going up and down for hours.
— Rev. Obadiah Horseworthy

The tension between the divine will and human self-will is a subject that pervades the book; to that subject the profoundest insights into the hidden activity of providence and into human nature are brought.
— Emanuel Swedenborg

Groundlings of Divine Will is available from various retail outlets such as Amazon.com, Amazon.co.uk or direct from the Skylight Press website.