The Chronicles of the Sidhe by Steve Blamires 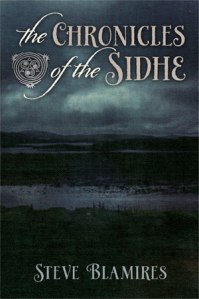 Forth from his breast the old man drew
A lute that once on a rowan-tree grew:
And, speaking no words, began to play
“Over the hills and far away.”

For a thirteen-year period, the reclusive Scottish writer Fiona Macleod enthralled the Victorian reading public with a deluge of stories, novels, poems and essays drawn from the wildly romantic Highland and Island landscape. Despite the great enigma surrounding her identity she was widely accepted as a leading voice for Celtic expression, even included in Who’s Who for 1900.  What a scandal, then, when it was revealed that this enticing woman was in fact one and the same as William Sharp, the male Scottish writer!  Of course, nom de plumes and literary doubles were rampant as exampled by the likes of Mark Twain, Lewis Carroll and George Orwell.  Even gender swapping authorial entities were in vogue, as George Eliot and George Sand could attest, and this probably seemed to be one of many publisher’s tricks to generate sales and interest.  Consequently, Fiona Macleod’s stock tumbled, her writings slowly ebbed out of print, and her notoriety was mainly limited to the long running opera based on her play, The Immortal Hour, which ran in England in the 1920’s and 1930’s.

But for a small few it was clear that Fiona Macleod was more than a pseudonym and that to Sharp she was very much an autonomous entity. The allusion to the unknown yonder in her famous poem also seemed to intone much more than the mythically pastoral and romantic Eden of the Celtic Twilighters.  What’s more, from her work can be gleaned a wealth of previously unknown and unheard of myths, names, traditions and beliefs, which while shone through a Celtic prism, offer a unique and portentous glow.  Enter Steve Blamires and his groundbreaking assessment of Faery lore as teeming through Fiona Macleod’s diverse literary output.  Of course, he is already known to us as a result of his recent and authoritative biography of Sharp, The Little Book of the Great Enchantment, which showed Sharp to be a fascinating subject in his own right; a respected poetry editor, a frequenter of Pre-Raphaelite meetings, and a member of the Golden Dawn and Yeats’ secret Celtic Mystical Order. Now follows The Chronicles of the Sidhe, in which Blamires turns to Fiona’s rich and resonant body of work, offering a detailed interpretation that will enable the reader to tease out the Faery gems that are still to be found woven into the lines and verse of her writings.

“I was born more than a thousand years ago, in the remote region of Gaeldom known as the Hill of dreams…”  Blamires introduces Fiona Macleod as a self aware entity, someone who thought and lived separately from William Sharp, answered letters independently of him, and even wrote to him on occasion with encouragements, upbraids and confessions.  Although a woman with deep connections to the fading Gaelic world (Gaelic and Celtic shown by the author to be synonymous with the faery realm), she was not quite aligned with the optimistic and revivalist Celtic Twilight movement of the 1890s.  She thought of herself as coming from “a doomed and passing race” – fading and forever harder to reach.  Another such person is the mysterious Seumas Macleod , a Hebridean fisherman who made a big impact on the young William Sharp.  Also known as ‘Seumas the Seer’, this shadowy figure crops up in various stories as well has having an entire essay dedicated to him – Seumas: A Memory.  As a fisherman (which has its own spiritual resonance), Seumas is a pure Gael in that he’s never been to the mainland, indicative of his own unblemished faery persona.  Blamires shows how this father-like figure from Sharp’s youth, is also both the physical and spiritual father of Fiona, thus completing their own unique trinity.

With so much on offer in this book Blamires offers a succinct background of the faery tradition before the Disney-led ‘fairy’ defilement of the 20th Century, a full report on the various mythologies (including the origin stories and early Christian analogues), a stimulating pantheon of revered Gods and Goddesses – some recognisable and some distinctly new, the important traditions of the poetic and incantatory runes as preserved by generations, and the four cities or realms of faery that represent albeit near transparent intersecting points for humans.  As an experienced practitioner Blamires advises readers not to dilute the faery tradition by mixing it with other occulted comforts and that they try to understand that the faery realm exists outside the spatial elements that guide other Western Mystery traditions. One must simply embrace it for what it is. It is wholly separate from the human-based Celtic tradition, is not a religious system per se, but can co-exist harmoniously with other beliefs.  Like the Celtic tradition it existed side by side with the early Christian church for centuries and often intermingled with the faith and rituals of early Christian saints like Columba of Iona. Macleod also embraces the Christ as an archetypal entity of both light and dark, complete with his own faery aura. The possession of another religion should not necessarily conflict or interfere with one’s experience of faery and many Celtic Christians were quite at home with what was accepted as a bona fide realm up until the Victorian age.

Blamires encourages readers to seek the same sort of faery contact that William had with Fiona, although stressing the uniqueness and rarity of that particular instance. The book gives practical guidelines for travelling the realm of faery, careful to show that it is not all one-way communication but needful of the willingness of the subject.  The author combs through Macleod’s entire oeuvre with exegetical aplomb to uncover faery lore contained within, whether directly stated or alluded to through a series of careful clues.  He shows the conjoined sense of joy and sorrow as being a manifestation of the spiritual intensity of faery consciousness, which is quite ahead of its time in that it breaks the binary of opposite states, transcending them to find the unity of truth.  This is uniquely offered in that the particular joy and sorrow of woman comes through the consciousness of man – so poignant for our times. The book ends aptly with Macleod’s Invocation of Peace, and what became a Scottish gift-shop treasure now becomes the spiritual gift of life-giving breath:  “Deep peace I breathe into you”  – peace from the ‘deep’ or the realm of faery.  This transference of breath alludes to the shared breath and voice of William and Fiona and that of those who wish to partake of the rarefied air of the realm.  Blamires leaves us with a final invocation, which is a calling-upon, an entreaty for lasting peace that can be found through the veil.

The Chronicles of the Sidhe is available from various retail outlets such as Amazon, Amazon UK, or direct from the Skylight Press website.

2 Responses to The Chronicles of the Sidhe by Steve Blamires