To Think Without Fear by Anthony Duncan 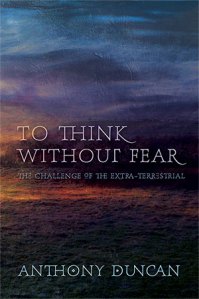 “To think without fear is to occupy a position from which the mind can be led into an ever more profound participation in Mind Itself. This is the quest, not for Knowledge, or even for Understanding, but for Wisdom. Wisdom carries with it a sublime and all-transcending contentment, not necessarily to know, nor even necessarily to understand, but to accept joyfully, with an unconditional love…”

To Think without Fear is a new and previously unpublished book by the late Reverend Anthony Duncan, author of The Christ, Psychotherapy and Magic and many other wonderful titles. It might be more accurate to describe this ground-breaking work as ‘previously unpublishable’ but thankfully it has now come to light in a more open age.

The author, although a Christian cleric, openly and frankly examines the experience of communication with “extra-terrestrial” contacts, and the leaps of faith and mutual acceptance on which such contact depends. He considers that many reported experiences of the extra-terrestrial are essentially objective and real, and that there is a common, underlying dynamic which is prompting an increasing – and increasingly varied – pattern of visitations. But who or what are these visitors? Do they come from elsewhere in our Universe or from another Universe altogether? Do they travel here across space or by a shift of wavelength? And how do they fit into the pattern set by the Incarnation of Christ? Duncan suggests that the first step towards an answer is to simply let go of our fear.

It is fair to say that there has been a plethora of books on alien visitations, abductions, ancient architectures, etc., but few from this particular vantage point. In stripping away all the normal prejudices and fears Duncan willingly wrestles with challenges to what we know of science, religion, psychology and philosophy. Far from being yet another stock collection of alien sightings and spooky phenomena this work really questions what it is to be humanoid, to be fallen, to be dependent upon states of grace. He traverses the idea of folk memory just as willingly as the vistas of space in search of cosmic companionship. The notion that humans are ‘recreated,’ constantly modifying each other, becomes a unique demarcation in the face of all possible parallels and pluralisms. Perhaps the greatest gift of the book is the author’s willingness to try and inhabit the mind of other, how they may be guided by scarcely fathomable structures and processes, and what it means for them to confront both the ‘atmosphere’ and the ‘aura’ of the human realm.

Although presented from a Christian perspective, the book offers a sane and sensible discussion of a controversial subject by a priest and mystic who has never been afraid to think and minister beyond conventional boundaries. Indeed he anticipates quantum theory in his redefinitions of space and time, which allows for the possibility of visitations on other planes and realms. What happens to our archetypal notions and avataristic experiences when the life of the mind and the soul are stretched beyond earthly constraints? The book concludes with the author’s personal encounters – not just with the alien other but with the mechanisms of fear that hold us all back. Skylight Press is thrilled to publish this little treasure and present more works of Anthony Duncan to the world.

To Think Without Fear: The Challenge of the Extra Terrestrial is now available from various retail outlets such as Amazon.com, Amazon.co.uk or direct from the Skylight Press website.