The Passenger by Richard Froude 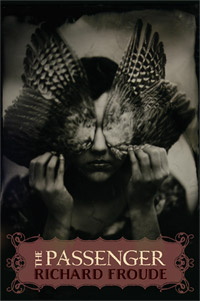 Identity is so often bound up in where we’ve been, where we’re going, and where we are.  Basho once said something to the effect that man travels around seeking so much that the journey itself becomes home.  This is never more true than for the immigrants among us.  For them, the acculturative state they daily explore is a strange zone between their place of origin and their place of destination.  Perhaps Rilke is right de-emphasize place and offer that “the only journey is the one within”  – but yet there is much to explore in how environs, memory, and anticipation play on each other.

Richard Froude is The Passenger willing to navigate both duelling states and hybrid forms, always a precarious landscape for a pioneer poet.  His new book is a whimsical but dynamic map that charts new spaces between psychic continents, between origin and destination, where the toiling cartographer is beset by the shifting tectonic plates of constant redefinition. The reader shares the journey as co-passenger, prompted to find their own zone of being between the root and flower of experience.

Froude’s unique style is some sort of  revolving-door, post-avant hybrid poetry that finds a way to amalgamate and track in the forebrain like fiction.  Of course, hybridity is not new in cultural identity or literary forms but Froude finds interesting ways to morph, merge and multiply its application.  His work leans stateside in that it satisfies Cole Swenson’s criteria for what constitutes the ‘American Hybrid’ – where the author is encouraged to “renew the forms and expand the boundaries of poetry – thereby increasing the expressive potential of language itself.”  Stalwarts of American poetry after Williams will catch wisps of the poesy-prosy short paragraphs of Brautigan and the like.  But there is also something uniquely British in the voice  –  the staccatoed happenstance recall of mid-latish Woolf perhaps, or the snaking Thamesian narrative of Iain Sinclair’s Downriver – in that it’s meanderingly connective and yet full of rich silted sediment.  Most certainly there are traces of that slightly self-deprecating English humour.

In a world where time and place are amalgamated one meets with a strange coterie of cavorting beings – from recognisables like Thatcher and Proust to odd silhouettes like Digital Zero.  Froude’s is a new/old world peopled with dislocated figures in some absurd geo-spiritual collage. Kevin Killian summarizes aptly: “his method is to surround an autobiographical kunstlerroman with a variety of historical facts and sidelights.”  The journey is also strangely informational with its whirl of fascinating anecdotes.

Skylight Press is proud to publish The Passenger. Portions of the work have appeared in various journals and sections have been previously published as limited edition pamphlets by Catfish Press and Candle Aria Press.

“Richard Froude was grown from film stills. Above all he was a mirror. Much of his soil was gathered from conversation. Nothing is outside the screen. His house was built entirely of redirected rivers. This caused a book of between, a book of plywood and polymers, a book we are never finished reading.” – Eric Baus

“The wild mind and language keeps coming. Richard Froude always surprises and The Passenger is no exception. Characters with terrific allegorical names like Design and Zero romp in the skies. (“My limbs are cirrus clouds”). America is a linguistic map of fleeting yet marvellous accounting. “Here, existence as repetition,” we note as we converse within the Q&As and trajectories of futuristic twists and boggle. Kudos to this rich, hilarious mental acumen.” – Anne Waldman

The Passenger is available from various retail outlets such as Amazon, Amazon UK, Waterstones online, or direct from the Skylight Press website.