The Testament of Merlin by Théophile Briant (trans. Gareth Knight) 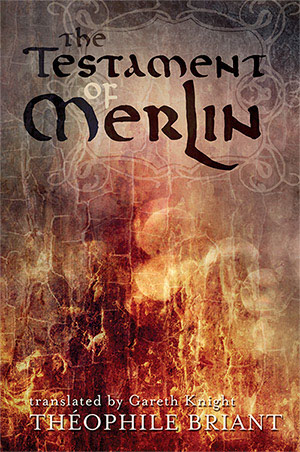 Myrddin is the beloved legendary wizard that has come down to us through the British and French Arthurian legends as well as a smattering of mediaeval Welsh poets. Amalgamated from these many diverse strands, he stands before us as a completed figure in Geoffrey of Monmouth’s great 1136 work, Historia Regum Britanniae. But there are always more sources to explore, some of which are just being translated for wider consumption.

The Testament of Merlin is an evocative esoteric novel that follows the life and work of Merlin as the founder of the Round Table fellowship, his return of Excalibur to the Lake, his safe conduct of Arthur to Avalon, his liaison with Viviane and the Faery powers in the Forest of Broceliande, and the resuscitation of his disciple Adragante in the Cauldron of Keridwen – including a remarkable sequence of initiations for the young knight. For it is Adragante who is called to bear witness to Merlin’s life, his death at the hands of some shepherds at Drumelzier on the Scottish borders, and his subsequent apotheosis. This exquisite offering from Théophile Briant is both an action-packed adventure and page-turner in the conventional fiction sense – as well as an esoteric work of depth and scope for practitioners in the Western Mystery Traditions. Much of this new translation is of great contemporary relevance in the present clash of Christian and Neo-Pagan dynamics.

Known affectionately as ‘poète de la mer,’ Théophile Briant needs no introduction in France: from an old windmill and lighthouse in Brittany he published, between 1936 and his death in 1956, a remarkable journal (Le Goëland, or The Seagull) devoted to poetry, the arts and the esoteric. A great enthusiast of all things Breton and Celtic, he spent twelve years writing this powerfully esoteric novel, which was not published until nineteen years after his death and amazingly has not appeared in English until now. A perfect conduit for such a revelation, Gareth Knight is one of the world’s foremost authorities the Western Mystery Tradition and author of other respected grail lore books including Merlin and the Grail Tradition, The Secret Tradition in Arthurian Legend, and The Fairy Gates of Avalon. The Testament of Merlin is another of Knight’s important translations, which include The Romance of the Faery Melusine (André Lebey’s 1920s novel exploring the work of 15th Century trouvere, Jean d’Arras) and The Initiations of Paul Sédir (an important figure of the late 19th century occult renaissance in France).

Skylight Press is thrilled to publish The Testament of Merlin, which can be ordered through Amazon, Amazon UK, or directly via our website