Letters of Light: The Magical Letters of William G. Gray to Alan Richardson 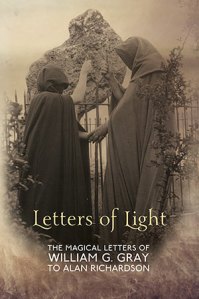 “When it comes to that curmudgeonly mage William G. Gray, put aside what you may have plucked from a less-than-accurate, holier-than-thou, insufferably superior but dried-up grapevine. Whatever his faults – and he had many – he never stinted on passing on his knowledge to genuine enquirers. In many ways, through his correspondence, I saw the very best of the man

I was 17 when I first wrote to him: omniscient, quietly obnoxious. I knew everything; I knew nothing. I really needed putting in my place. And I couldn’t have picked anyone better to do this than Bill Gray.

Some of you out there may think that your own magical teachings came from the temples of Greece or Khem, from the vaults of the Rosicrucians, the lodges of the Golden Dawn, or the pagan-haunted glades of the ancient Wildwood. They did not. They came from 14 Bennington Street, Cheltenham…”

This is how Alan Richardson summarises this new book, a compilation of letters from William G. Gray to an aspiring acolyte. Rather surprisingly, it works on a number of levels depending on the approach a particular reader might take. It’s a post-modern Bildungsroman (and Bill certainly flings dung in places) where the reader constructs a narrative plot from various fragments – not having the younger man’s replies to work with. Of course, the letters also provides a riveting and provocative treatise for those interested in ceremonial magic and group dynamics. Also a fascinating social study, Gray continually prods an insecure youth towards the value of solitary practice and the DIY ethic.

As an “omniscient and obnoxious” teenager in 1969, Richardson first wrote to the occult author and teacher in pursuit of instant magical enlightenment. While he didn’t quite get that, it was the beginning of a correspondence lasting many years in which Gray generously shared his magical knowledge and experience. Gray’s letters, witty, acerbic and blunt, contain a wealth of hints and tips on working with Qabalah, his views on Dion Fortune, sex magic, initiation, joining magical groups, and how to stay on the straight and true path to Light regardless of what life flings at you.

The topicality of the letters provides an incredible range and depth, with commentary to continually delight, chafe or probe. How does free-will relate to Destiny? Why do many great Adepts behave like idiots if they’re in contact with Higher Powers? Is sex incompatible with a spiritual path? He addresses the questions which weigh on the mind of every magical seeker – always with the proviso that true wisdom can only be reached from within oneself. The letters are a delight to read and show the humour and understanding which shine through Gray’s famously unsentimental character. The highly personable nature of the book will help to cast the oft-maligned Gray in a new light – as the reader becomes very conscious of the growing warmth and care the old Magus develops for his pupil. The lessons contained within the letters be of direct practical value to anyone pursuing a magical path of any kind, Qabalistic or otherwise, and his advice to his young apprentice is every bit as pertinent today as it was back then.

Skylight Press, also of Cheltenham, is thrilled to offer this valuable and enlightening collection to the world for the first time. We are committed to the legacy of William G. Gray and look forward to publishing many more of his works.

Letters of Light: The Magical Letters of W.G. Gray to Alan Richardson is now available from various retail outlets such as Amazon.com, Amazon.co.uk or direct from the Skylight Press website.

3 Responses to Letters of Light: The Magical Letters of William G. Gray to Alan Richardson