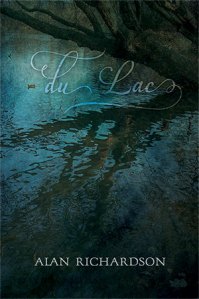 “So I cannot say for sure how old I am because I cannot see my beginnings. When I try to look, I’m peering into the lake bottom which is my genesis: things are stirred up, rising like muddy, formless wraiths that soon dissolve back into the dark, cold waters. There is a pressure in those depths on my eyeballs which makes my vision not true. Strong currents. Things touch me: debris? rotting vegetation? old loves? mouldering corpses? memories of my creation? It is deep, deep water and yet I can breathe it as well as air…”

For those wild fée souls wearied by the spiritual tyranny of the Holy Grail, the great du Lac with his heart of diamond and heart of wax can show that there is always Another Way. His path has nothing to do with blood-dripping spears, floating chalices, high-born celebrity virgins of perfect beauty who disappear into their heavens and leave the rest of us to rot. It has everything to do with warmth, courage, gallantry, fumbling attempts at wisdom and all those senseless, stupid, impulsive acts of love between the low-born common folk that are the true Mysteries of the Wasteland.

Du Lac is the latest fictional lagoon offered by Alan Richardson, following such free-flowing novels as On Winsley Hill, The Giftie, The Fat Git and Dark Light. Of course, Richardson has also worked with Arthurian and Magical themes in his stream of many non-fiction books, which include the biographies of such luminaries as Dion Fortune, Aleister Crowley, Christine Hartley and William G. Gray. Indeed, he cites this voluminous work in his introduction to the book when speaking of the tremendous impact of his main character:

“Although I have modified/evolved/changed my opinions completely about many things in the esoteric field over several decades, I am still certain about this: if du Lac was denied heaven because he wasn’t chaste, because he had loved too much and unwisely and done stupid things for love, then the Holy Grail itself and the Heaven it offered was not worth a spit…”

Part of the ongoing intrigue is the slippery and amorphous aspect of du Lac, an indeterminate persona that nevertheless casts long, dark shadows. Again, from the introduction:

“I don’t know whether du Lac is a wild ancestral faery being, a magickal current using a human image to express itself, an historical member of the del Acqs family, or an archetype resonating to various tetchy aspects of my own personality. Or perhaps bits and pieces of all these…”

Richardson achieves a liquid fiction by allowing his tricksy first person narrator a scope and flux that traverses the serious and the absurd. He gets du Lac to tell a story by what he says, but also another, separate, parallel story by what he doesn’t say. There is an aqueous ‘stream of consciousness’ throughout that allows for some access the mind of du Lac, at times crystal clear – at other times muddied with strange sediments. The total effect is an ancient-modern chimera of sorts, sometimes evoking the mythic fantasies of Hoffman, Kafka, Angela Carter, while allowing for some faint elements of Swiftian satire. The experimental nature of the novel is what gives it impetus – that sort of probing, circuitous fiction that submerges the reader far deeper than any straight-ahead narrative would. du lac has an ambiguous seeping presence as a mythical anti-hero and there are always hints at the possibility of delusion in his kaleidoscopic world. The reader never quite settles as the swirling allusions are kept in flux.

And yet there is a serious undertow to consider, as with all of Richardson’s fictions. Wendy Berg’s exploration of the relationship between human and Faery as being the very core of the Arthurian stories in Red Tree, White Tree seems to be a strong inspiration for the work. Like Berg, Richardson re-evaluates the powers behind the fellowship of the Round Table and questions what it is to be Fée or Fey. The book churns with marvellous anecdotes from the Arthurian traditions and from History as a whole. It also plays with the fine lines between initiation and delusion, the elect and the insane, the immortal and the immaterial, the liquid and the solid. In a very real sense it represents the dilemma that most magical adherents face simply living in the modern world. Holly Ricioppo, an early reviewer of the text, summed it up thus:

“There is something seriously liminal about this book – it’s comic and at times utterly poignant and most of the time rather bonkers but what has unexpectedly captivated me is that while there are lots of other writings about the character, this book seems to bring him out of the remote lofty realms of poetry and serious attitudes into the now, with all the confused, awkward, muddled, preposterous questing of modern mortals…”

du Lac is now available from various retail outlets such as Amazon.com, Amazon.co.uk or direct from the Skylight Press website.