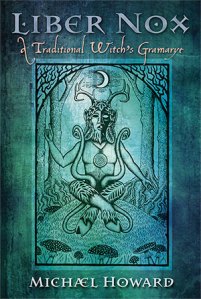 “Many traditional witches regard themselves as the stewards or guardians of ancient sites near where they live, such as stone circles, burial mounds, standing stones and hill-figures. They meet for rituals at remote crossroads or near the prehistoric trackways, ‘green roads’ and old drovers routes that often mark the spirit paths, ghost roads, faery paths, dragon tracks or ley lines that crisscross the countryside between ancient power centres. Such etheric paths are used for spirit travel to the Otherworld, hence the popular image of the witch flying through the sky on a broomstick, and are also the routes across the countryside taken by the Wild Hunt and other supernatural phenomena such as the Death Coach…”

In this concise and important treatise Michael Howard delineates between various modern neo-pagan Wiccan traditions, cunning folk traditions, heathen folk or the ‘pagani,’ and an assortment of ritual magicians and pathworkers in order to present a ‘gramarye’ distinctly for those who aspire to the ‘Old Craft.’ An experienced practitioner, writer, researcher, folklorist and magazine editor of the respected witchcraft magazine, The Cauldron (since 1976), Howard elucidates important elements of the ‘Traditional Craft,’ including preparation rituals, tools of ‘the Arte,’ fellowship of the coven and the casting of circles, finally taking us through the ‘Great Wheel of the Year’ and the assortment of sacred rites as performed within. The seasonal rituals that comprise the latter half are based on traditional witchcraft and folklore sources and have been specially written for this book.

With precise prose and a grand assortment of examples, Howard opens with a succinct history of the Traditional Craft. Somewhat in the spirit of Ronald Hutton’s seminal Triumph of the Moon it presents a compelling historical overview but one not bogged down with the flights of fancy that has blighted so many written accounts of witchcraft. Howard discusses cunning traditions, ancient paganism, the ‘burning times,’ the Arthurian tradition (‘Matter of Britain’), Faery lore, 19th Century esotericism (per the likes of Dion Fortune and Christine Hartley), agrarian practices, sacred landscapes, coven hierarchy, Cthtonic deities, and the Greater and Lesser Sabbaths that comprise the ‘Wheel of the Year.’ This opening section alone is worth the price of the book and will appeal to people with more philosophical or historical interests in the Craft, as well as those with more practical leanings.

The rest of this much-anticipated work follows the traditional Gramarye format in that it provides a practical handbook for ritual practice. Howard stresses the importance of ritual preparation, both for participants in the rite and their ceremonial tools. Those interested in entering the Craft will find instruction on casting the circle as well as practicing basic rites that span the calendric year. Throughout, Howard dispels various myths, untangles half-truths, but is always careful to preserve and encourage the rich diversity found within Traditional Witchcraft. Neither dogmatic nor condescending, this is a work that can be treasured by all manner of groups, covens, as well as solo practitioners and Hedge Witches. The book is beautifully illustrated by Gemma Gary and includes specific rituals complete with their incantatory and ceremonial poetry in the final section.

Skylight Press is thrilled to publish Liber Nox: A Traditional Witch’s Gramarye and hope to follow it with other titles in the pagan traditions.

Liber Nox is now available from various retail outlets such as Amazon.com, Amazon.co.uk or direct from the Skylight Press website.