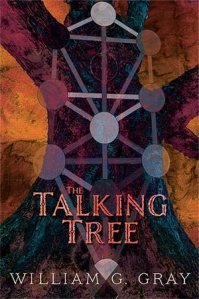 Exactly what were the Qabalists seeking? Their main objective was the same as other Mystery Schools, namely the discovery and knowledge of the Elements of Existence in terms of Fundamental Energies, and the codification of Consciousness as the Pattern (or Paths) of Cosmic Relativity. They were looking for the most basic construction of Creation itself, and the best means of using such knowledge for the advancement of humanity toward Divinity. They realised perfectly well that Life begins and terminates from Within, and that ability to control Inner conditions will determine Outer effects. So, of course, did other Systems, but the Qabalists’ aim was to find a sort of Master-Formula for the Plan and Process of our Inner Identity which would afford maximum assistance to those souls already in the vanguard of humanity and on whom devolved the responsibility for leading Mankind toward ultimate Light…

In The Talking Tree: Patterns of the Unconscious Revealed by the Qabalah W.G. Gray presents an encyclopaedic and systematic analysis of the 22 Paths of the Qabalistic Tree of Life and the archetypal principles underlying them in each of the ‘four worlds’. This unique work by a leading Qabalist of his generation includes a detailed and comprehensive study of the symbolism of the Tarot, in which he offers an alternative method of allocating the Major Arcana to the Paths in place of the commonly used Golden Dawn system. He also explains how the Western alphabet can be applied to the Tree of Life as a viable alternative to Hebrew letters. The new Skylight edition now reverts back to W.G. Gray’s original title as first published by Samuel Weiser after being reissued as Growing the Tree Within by Llewellyn Publications, and includes additional diagrams as well as a new introduction by the author’s colleague, Gareth Knight. Knight, who was initially responsible for discovering and first publishing the work of W.G. Gray, provides some insight as to the history of the work:

“He had some difficulty in getting this published at first owing to the fact that it appeared too original. Actually it is deeply traditional but what scared the commissioning editors and their accountants was the fact that he was not using ‘traditional’ allocations of Tarot Trumps or Hebrew letters to the Paths. By which they meant those favoured by the founders of the Hermetic Order of the Golden Dawn back in 1888…”

He also addresses potential concerns of those embracing an alternate system:

“Yet, as one serious student rather nervously put it to me, on being confronted with W.G. Gray’s correspondences in The Talking Tree – “Will it work?” To which the confident answer can be made “Yes, it will!” I can say that with full confidence on account of having tried it myself, and also upon the evidence of the work of R.J. Stewart, who like myself was a student of W.G. Gray for a time, and whose books Living Magical Arts, The Merlin Tarot and The Dreampower Tarot use the same allocations as Gray with impressive verve and originality…”

This book is a priceless reference work for the serious Qabalah student who has already studied the ten Sephiroth and is looking to move on to the Paths. As well as explaining the function of God-names, archangels, angelic orders and mundane archetypes for each Path, Gray seeks to demonstrate that the Tree of Life is in a continual state of growth and evolution, and that those who study and work with the Qabalah should not be afraid to apply new correspondences to it and rethink some of the traditional assumptions. Alan Richardson, the foremost biographer of W.G. Gray (see Skylight’s recent reissue of The Old Sod: The Odd Life and Inner Work of William G. Gray with Marcus Claridge) provides an interesting gloss on Gray’s acumen in a recent essay published in the Society of Inner Light Journal entitled 22 Shades of Gray:

“A few magicians such as Crowley, Frater Achad and Paul Foster Case determined their own systems of tarot/Tree correspondences, but they never ventured far from the original, and were all still hooked onto the Hebrew letters. It was an outwardly tough but inwardly warm Englishwoman called Bobbie Gray who, in the mid-60s, said to her husband: “Why does it have to be in bloody Hebrew? What’s that got to do with us here?” Her husband Bill, too old to be an ‘enfant terrible’ but most definitely something of an ‘eminence grise’ by this time, looked at the whole Golden Dawn system and agreed…”

“Gray didn’t take sole credit for his sublime system of tarot correspondences. He told me quite candidly that these came directly from his inner contact with the spirit of Dion Fortune. Likewise, when he detailed these correspondences in the large and later tome The Talking Tree, Bobbie told me that when she was taking down his dictation she often couldn’t tell whether it was Bill speaking to her or Dion. I make no judgement on this, I simply pass on what was said…”

Skylight Press is thrilled to publish a new edition of this unique and important work, which will be followed by new reissues of Seasonal Occult Rituals and various other W.G. Gray titles. The man known to most as Bill Gray was a significant occult teacher, an inspirational force among various esoteric enclaves, producing work worthy of a larger readership and greater appreciation.  The Talking Tree is now available from various retail outlets such as Amazon.com, Amazon.co.uk or direct from the Skylight Press website.

1 Response to The Talking Tree by William G. Gray