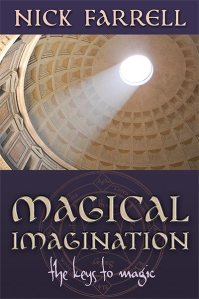 “Imagination is our inner vision, our human skill to see different realities. It can take us to the throne of God, it can connect us to the stream of infinity and enable us to see the universe for what it really is. It can help us take up our crown as a co-creator with God and build our own universe. But this same tool can also trap us into our small human lives until we are prisoners imprisoned in matter, forced to look at shadows on the wall which life has convinced us is reality…”

Much has been written about the human ability to form new images and sensations independent of sensory perception and even Albert Einstein once remarked, “Imagination is more important than knowledge. Knowledge is limited. Imagination encircles the world.” Nick Farrell joins some fine esoteric company in exploring how controlled use of the imagination is fundamental to magical practice in his new book, Magical Imagination: The Keys to Magic. An experienced author and practitioner in various mystery traditions, earth and ritual magic, he is well placed to offer a comprehensive study that provides the keys to understanding by harnessing powerful inner techniques. The book is based on his previous work, Magical Pathworking, but this greatly revised and expanded edition includes new chapters which further develop the techniques of pathworking for magical and spiritual purposes. It covers group work, divination, visiting other inner world dimensions and working towards what Farrell calls ‘objective pathworking.’ The original work published by Llewellyn was described thus:

“Personality refinement is a precursor to serious spiritual work. Through techniques of pathworking (guided meditation), your imagination can shine a magic mirror on your personality. This inner landscape reveals your world as your unconscious sees it – a perspective that enables you to make dramatic changes, even to the point of rooting out neuroses and recovering from psychological trauma. This book demonstrates the mystical use of pathworking as a method for contacting the divine.”

Born in England and raised in New Zealand, Farrell was initiated into Builders of the Adytum (BOTA), and is currently an initiate of the Esoteric Order of the Golden Dawn and one of its branch orders, the Order of the Table Round. He now runs a temple in the tradition of Esoteric Order of the Golden Dawn, lectures and runs workshops throughout the world. He has contributed to Quest, Liongate, and Round Merlin’s Table magazines and Chic and Tabatha Cicero’s Hermetic Journal.  His previous books provide commentary on an impressive array of subjects, including Making Talismans, Magical Pathworking, The Druidic Order of Pendragon (with Colin Robertson), Egyptian Shaman, King over the Water, and Mathers’ Last Secret (followed by a Revised version).  He has recently contributed to an anthology called Commentaries of the Golden Dawn Flying Rolls with a number of authors including fellow Skylight Press author, Peregrin Wildoak, who offers the following insights about Magical Imagination:

“Even if you think you know all about visualisation, pathworking and the magical key of imagination – even if you teach the subjects – this book will astound you. Nick Farrell explores magical imagination with depth and discernment, revealing principles and methods that will enrich and transform your magical and spiritual practice. Quite simply, this book is the best of its kind and extends the magical use of imagination to new heights and insights. It is an essential book for all magicians, Pagans and anyone who works with the inner realms.”

Indeed, Farrell instructs on modern Imagination techniques, the Inner Kingdom, changing the psyche, the incorporation of myths, pathworking, dreams and the use of various mystical tools, but the real strength of the book is the author’s demonstration of a virile and inventive imagination throughout. He uses fresh examples, makes bold connections and draws from a wealth of associations –  from ancient societies to pop culture. Not just content to pontificate about imagination the author provides explorative insights and draws humorous and surprising parallels from his own experience. Beyond the teaming and delightful references can be found a plethora of useful exercises and practical applications.  Farrell explains in his introduction:

“As my spiritual path has progressed, the emphasis on the psychological interpretation of imagination techniques has become less of a personal focus as I started to understand its wider use in magical practice. In this edition I have reworked the previous material and added new chapters which aim to open the techniques for a more magical and spiritual purpose.”

Skylight Press is trilled to publish Magical Imagination: The Keys to Magic in support of this wonderful author and teacher. The book is available from various retail outlets such as Amazon.com, Amazon.co.uk or direct from the Skylight Press website.