The Savoy Truffle by Patrick Harpur 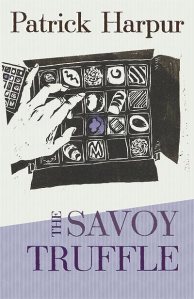 The kitchen was narrow and dark, so it was difficult to see what damage the bluebottle – if it had been a bluebottle, which was by no means certain – it might not have been a fly at all – what damage the hypothetical insect had wrought. She couldn’t see any eggs. But that didn’t mean much in the circumstances. She had a brief vision of her poisoned children turning blue at the lunch table, slumping face down into the lovely brick of Wall’s she’d bought half an hour ago from the van; a brick, zut, that was already spreading in the warm larder…

The Savoy Truffle chronicles the story of the aptly named Blyte family in a dramatic novel about life in one of Britain’s affluent suburbs in the early 1960s. Coming from the philosophical mind of Patrick Harpur, who made his name writing books like The Philosopher’s Secret Fire: A History of the Imagination and Mercurius: The Marriage of Heaven and Earth, the book makes for a whirling concoction of complex characters wrestling with prevailing attitudes and emerging ideas. Instead of the stock blissed-out revisionist nostalgia you get in most re-enactments of the 60s Harpur dares to portray the generational clashes amid awkward transitioning from Britain’s post-war era. Comedic passages are deftly infused with stark realisations pertaining to the gender and class issues of that time.

Indeed The Savoy Truffle is a literary treat, chock full of historical anecdotes and cultural associations, a veritable truffle worth digging through the layers of our past for. But those of a certain age will also remember it as a Beatles song where George Harrison wrote and sang about Erick Clapton’s chocolate addiction, as recorded on the now legendary White Album. Many of the delectable choices from the Mackintosh ‘Good News’ assortment were recorded in those lyrics – Montelimart, Ginger Sling, Cream Tangerine, Coffee Dessert – but the prize was always the Savoy Truffle. The Blytes lived in a time where the selection process was crucial, where new flavours clashed with old leftovers. It was an age where the family-owned businesses like Mackintosh & Sons Ltd of Halifax, or ‘Toffee Town’ as it was known, were on the precipice of conglomerate mergers and corporate take-overs, the Nestlé globalisation of England. But it was also the age of the ‘favourite Beatle,’ who obliges by ghosting in and out of this novel in the reveries of its most fanciful character.

Set among the mansions and tennis clubs of Surrey’s richest suburb, The Savoy Truffle is a darkly comic drama that evokes an era when Mod gear was fab, the Shorty Nightie shocking, the coffee frothy, and as aforementioned, the new Beatles’ single brought hysteria to the classroom. The grey post-war years are trembling on the verge of Technicolour, and the Blyte children are struggling to cope with the transition in their own idiosyncratic ways: Hugh’s novel is held up by yearning for the Irish au pair; Janey moons over the mystery of men and the enigmatic Black Mini; George wages savage war on his Enemy; and the Moo takes refuge in his exclusive Sloppy Club. A crisis in their parents’ lives brings madness and death, a supernatural visitor and an all-too-real tiger… The children have to confront – and conquer – the follies of their elders with wit and invention.

Raised in Surrey around this time, Patrick Harpur can be trusted to represent the period with humorous warmth, a critical eye, but also a piercing verisimilitude. He is no stranger to fiction either, having written a theological thriller, The Serpent’s Circle, and a novel about autism, The Rapture. His acclaimed Mercurius is also a partly fictional account about the alchemical arts. His work in Depth Psychology perhaps informs the wonderful and rich character development as well as the array of circuitous motifs that thread around the plot.

Skylight Press is thrilled to publish The Savoy Truffle, an exemplary novel in today’s confectionery box of literary fiction.

The Savoy Truffle is available from various retail outlets such as Amazon.com, Amazon.co.uk or direct from the Skylight Press website.