A Review of Dr. Dee: An English Opera 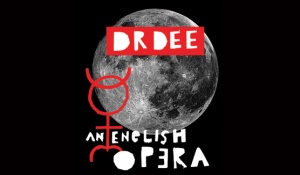 I have always been fascinated by the Welsh mathematician, scientist, astrologer, occultist, astronomer, navigator, and angelologist – Dr. John Dee – and finally got around to listening to Dr. Dee: An English Opera by former Blur, Gorillaz, The Good the Bad & the Queen, and Rocket Juice & the Moon front-man, Damon Albarn.  Dr. Dee was created by theatre director Rufus Norris (along with Albarn) and inspired by comic book author Alan Moore.  It debuted at the Palace Theatre, Manchester in July 2011 as part of the 2011 Manchester International Festival and ran from 1 to 9 July 2011.  Both the opera and the resultant album (Virgin Records, May 2012) received some acclaim, as evidenced by this quote from Rupert Christiansen: “Damon Albarn’s opera Dr Dee is a weirdly beautiful and original fantasia that, for sheer imagination, knocks most modern opera into a cocked hat.”

Although not strictly opera or period music from the Renaissance in the pure sense, the songs are quite provocative and stirring, with strong melody lines and lush but often deliciously sparse instrumentation.  True to music of Dee’s time Albarn utilizes viola da gamba, shawm, dulcian, crumhorn, recorder, and lute into a grouping of vocal pieces that he loosely posits as “strange pastoral folk.”  Ever the experimentalist he also weaves in some African kora and percussion, which works surprisingly well.  Many of the songs also incorporate vocal harmonies and a small chamber orchestra in ways that are not conventional in the operatic sense, although there are some small countertenor parts that recall Klaus Nomi.

Admittedly, there is no real attempt by Albarn at verisimilitude in relation to Dr. Dee as he prefers to simply meditate on various themes in his most personal and idiosyncratic way.  The source material is perhaps muddled at times but it is honest and fresh in a way that most contemporary rock/pop music fears to be.  There are moments of deep lyrical and spiritual beautify, which tug at something ancient and numinous in the listener – for which John Dee would probably approve.  The signature song Apple Carts is a beautiful vignette about a pastoral folk on the eve of civil war.  Like the rest of the album it is a summons to a dance, albeit perhaps a hermetic one.

Pull the apple carts
Up from silvery hill
Higher until heaven revealed
On the out of dawn, respawn

To great authority
Singing hallelujah hallelujah
Love does reign
In the kingdom of the broken heart
The blackbird sings
And the moon it laughs
As war begins, dance

Now burn the apple carts
Burn them until a great fire begins
To glow in the sky
There beneath the stones, recharge
From great austerity
Raining down from above
Distant is love
Our distain

In the kingdom of the broken heart
A blackbird sings
And the sun it laughs
As war begins, dance