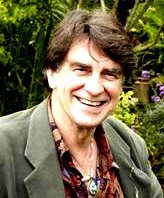 Born in the beautiful English country of Somerset, Gordon Strong is an author, teacher, musician, poet and Tarot reader. In his many and multifarious writings he delights in aspects of myth, philosophy, esoteric history, as well as various mystery traditions and sacred earth sites.  He is also an avid speaker, appearing often in both the UK and USA to address a variety of topics.  In one such event in 2008 Gordon contributed to The Citizens, an international project in which film-makers supplied footage on the theme of citizenship.  Strong was filmed carrying out Tarot readings, giving a talk, and joining a Druid ceremony at Stanton Drew. He also appeared in Sean Martin’s 2010 documentary Druid’s Grove, which is about the Druids and features Stanton Drew as a key location.  His work On Stanton Drew also appeared in Earth Energies, a DVD directed by Herma Koornwinder – and he recently appeared with Ron Hutton in the National Geographic broadcast, In Search of Arthur.  In addition, he is a frequent visitor at New Renaissance Bookshop in Portland, the East-West Bookshop in Seattle, and The Bhodi Tree in Los Angeles.

In an introduction to his writing on his website Gordon speaks of his life long fascination for words and the act of writing.  He explains – “I observe, reflect, experiment and, from all this awareness, my writing appears.”  Along with his public talks on the subject he has written extensively on the Stanton Drew stone circles complex in North Somerset.  The largest circle, the Great Circle, is second only in size to the better known Avebury Circle and is an equally impressive Neolithic monument.  Strong’s Stanton Drew and its Ancient Stone Circles was published by Wooden Books in 2008 and remains the definitive guide to the monument.  It was the end result of years of research and transcendental investigations, which has made him an international authority on the site. The book followed an earlier self-produced work, The Sacred Stone Circles of Stanton Drew, which placed the site in both a magical and a historical context. Strong has visited the site hundreds of times, in the company of dowsers, psychics, Druids, clairvoyants and the plain curious, and he makes special pilgrimages to the circles on the old Celtic quarter days.

Gordon Strong has garnered a world-wide reputation for a series of books on Western Mystery themes: Merlin -Master of Magick, The Holy Grail – King Arthur – and the Waste Land, King Arthur – the Wasteland – and the New Age, Brides Mound – Gateway to Avalon (with Celtic Artist Jen Delyth), and Tarot Unveiled. His latest book, Sun God and Moon Maiden: The Secret World of the Holy Grail, encompassing mythology, magic and cutting-edge physics, suggests that the presence of the Grail questions not only space and time but perception itself.  Strong has also written a series of books and articles on similar themes through his own Flash Magic 7 press. His numerous novels include ‘The American Trilogy’ (America Dreams, Windows of Heaven, and Only True Love) and Dawn of the Goddess.  He has also written about his many literary interests including informative essays on T.S. Eliot and John Keats.

Skylight Press is thrilled to publish works by Gordon Strong, who in our esteem is an important and emerging esoteric author and novelist.  The Way of Magic, an informative guide for any seeker of the mysteries, will be followed later in the year by The Sacred Stone Circles of Stanton Drew, an all-new work on his favourite subject.