Tarot & Magic: The Treasure House of Images by Gareth Knight 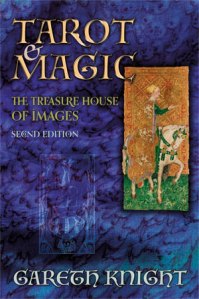 In recent commentary and conjecture the Tarot is so often presented solely, or at least principally, as a means for fortune-telling and psychic readings.  One glance at Gareth Knight’s Tarot & Magic will expose that approach is a gross reduction of what the Tarot really has to offer.  The book begins with an in-depth history of the Trionfi and all its manifestations –  from the tarocchi to the tarock to our common deck of contemporary playing cards.  Unlike most four-suited histories, which dither around some shadowy notion that the Tarot came from gypsies and their entrance into Europe in the late Middle Ages, Knight takes us back to antiquity to show much earlier precedents in places like Egypt and Persia.  The historical survey that follows casts a fairly wide net as Knight scours various continents and cultures to find the earliest connections between simple recreation and the attempt to devise a divinatory system with deeper meanings.  Of course, a lot this overview concentrates on the High Renaissance period as that was the time that Rabelais popularised the ‘tarau’ in his great works – and Ficcino, Botticelli, Gebelin and Boehme seemed to have made use of its symbolism in their works.  Knight then follows the trajectory of renaissance esotericism to the various mystical schools of the 18th and 19thcenturies, which then touches upon our understanding of the phenomenon today.

But the history of the evolution of the Tarot is only the opening portal by which we leap into our subject with this book.  Knight takes us through a full symbolic overview of the slightly variable suits, the developing face cards, and hieroglyphic presentations from various spiritual and cultural sources.  He guides us through the assorted hand-painted, flat-printed and esoterically charged collections, always pointing out the merits and defects in each case.  As one would expect there are an inordinate amount of superfluous or incomplete examples within this topic and the author quickly dispenses with the dross by settling on the Grimaud Tarot deck of Marseilles and subsequent decks of equal content and merit. He then goes on explore the magical elements contained within Tarot systems from the Lesser and Major Arcana to the Theatre of the Suits.

But it simply would not be a Gareth Knight book if the meticulously compiled scholarship were not dovetailed with some insightful and practical synthesis.  Neatly interweaved throughout all the sections in the book are a series of visual meditations and pathworking exercises that enable the reader to infuse themselves with the spirit of the Tarot.  In essence, the deck becomes a living commune and the reader is encouraged to connect with the breathing elementals that comprise it.  Sure, it is an exploration of the archetypal – but it is also a confrontation of the essential.  There is no cheap conjuring here; no parlour trickery and no prognosticatory ambush.  The Tarot becomes an organism imbued with the meaningful present – not some glib oracle of determinism by which to extort power. Knight allows us to reinvest in the dynamism, to lay out our inner map by this outward mosaic of images.  It is indeed a Treasure House!

Tarot & Magic was originally published in 1986 as The Treasure House of Images (Aquarian Press) and later re-issued as Tarot & Magic (Destiny Books) in the United States.  This new, revised and expanded edition amalgamates both former titles and includes a substantial additional section that pulls together many of the new insights Gareth Knight has garnered over the 25 years since it was first published.  Not just an expert in the field the author published his own esoteric deck, The Gareth Knight Tarot, in 1984.  Skylight Press is honoured to reissue this important work alongside the many other important titles by this sage of our time.

Tarot & Magic: A Treasure House of Images is available from various retail outlets such as Amazon, Amazon UK, or direct from the Skylight Press website.