How Much is My Strad Worth?

Back in the days when I worked in a luthier’s shop selling and restoring violin family instruments there was an oft occurrence.  About once or twice a week someone would come into the shop positively beaming and bearing and old dusty coffin style violin case.  They had come across a ‘Strad’ in their attic, in a forgotten cloister in their church, at a jumble sale, in an estate liquidation, or occasionally on eBay.  In all cases I would lift the violin out of its cobwebbed lattice and immediately know that it wasn’t the real thing but a copy, a reproduction, or a factory knock-off.  I would watch the smiles and optimism implode as I relayed my findings in the most gentle and diplomatic way I could muster.  Of course, my appraisal was never enough and I would always have to go and fetch the owner of the shop for a second opinion.  The sad fact was that none of these instruments were even close in age, origin, materials, and craftsmanship.  The copyists of the 19th Century varied in their reproduction abilities, some trying to ape the original in its grandeur but most content just to make a violin on the Stradivarius pattern and measurements.

Very people knew that his name wasn’t Stradivarius but Antonio Stradivari, the former being a Latinised form of his surname that became a popular ‘brand.’  Nor did they know that Stradivari was just one (albeit one of the finest) of many luthiers that were to become the Cremona tradition in Italian violin-making.  In fact, young Stradivari most probably got his start as an apprentice with a master (some say the ‘father of the modern violin’), Nicolò Amati. The Amati family were a veritable powerhouse in instrument making, especially when Nicolò fashioned his ‘Grand Amati’ pattern in 1640.  Their family names were also Latinised for popularity and his extensive line of students included the young Matthias Klotz who helped to start the now famous Mittenwald ‘Geigenmacher’ tradition in Germany.  Stradivari, who also had family members working in his workshop, was rivalled by the great Guarneri family working in Mantua and Venice, one of whom – ‘Guarneri del Gesu’ (Guiseppe Guarneri) was often said to match Stradivari’s famous craftsmanship.

Stradivari was not only a brilliant student but also a willing and wonderful innovator in his own right.  Having mastered the Amati pattern he elongated the dimensions to create what are now known as ‘Long Strads.’  His woodworking craftsmanship and attention to detail was second to none, improving corner shaping, interior block construction, and producing signature elegantly carved sound-holes.  But his crowning achievement was the concoction of his secret varnish recipe about which there has been so much conjecture since.  Amati’s varnish was a thinner and slightly more brittle yellow whereas Stradivari produced a thicker, deeper, and almost three-dimensional darker colour with iridescent hues.  The wonderful film, The Red Violin, was inspired by the Stradivarius ‘Red Mendelssohn’ violin and legend has it that there is some sacrificial blood in the mixture that gives the instrument a soul and memory.  In fact, Stradivari’s instruments all have rich and interesting lives.  The Duport Strad, made for Jean Louise Duport, was once tentatively played by Napoleon before making its way more recently to the great cellist Mstislav Rostropovich.  Similarly, the Davidov Strad started its life in the service of Tsar Nicholas II and was immortalised in the recordings of Jacqueline Du Pre before finding its way to current master cellist, Yo Yo Ma.  Stradivari instruments have sold for as much as £9,800,000 at famous auction houses.  They are often bought by rich benefactors, who then loan them out to famous players and top orchestras, 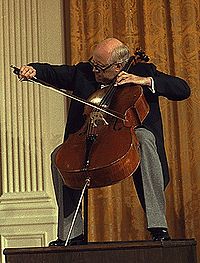 Meanwhile on the shop counter sits one of the thousands of German or Czech reproductions bearing the label “Antonius Stradivarius Cremonensis – Faciebat Anno 1707.”  It has the essential shape but none of the lustre of the original.  Alas it is not an instrument of Stradivari’s ‘Golden Age”  but rather one of the golden aping era of the 18th and 19th century copyists.  Unfortunately, bar a few stolen ones, just about all of Stradivari’s instruments are accounted for.  And yet the customers keep coming in hope – with lottery winning grins and retirement dreams.  I often wondered as I broke the news whether Stradivari had any inkling of what his name would come to mean in years to come.

Note:  The author worked for four years at the now sadly defunct Bass Viol Shop in Cincinnati before helping to design a line of student instruments for an International wholesaler.  The photos also serve to illustrate the mystique around Antonio Stradivari.  The first pic is a much romanticised 19th Century engraving, later painted by E.J. C. Hamman.  Picture two is also a 19th Centry depiction of Stradivari by Edgar Bundy.  In Picture three Jacqueline Du Pre is playing the Davidov Strad in the famed and filmed Elgar cello concerto performance of 1962.  The last picture is the brilliant Mstislav Rostropovich playing the Duport Strad.  The author, being a cellist, moderately apologizes for the lack of violinist photos.