Gwenevere and the Round Table by Wendy Berg 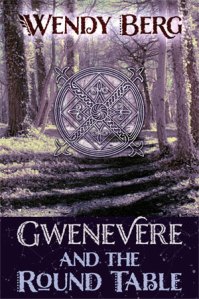 Following on from the impressive and scholarly Red Tree, White Tree, Wendy Berg delivers the hotly anticipated sequel, Gwenevere and the Round Table.  Where the first book was a comprehensive study of a variety of Arthurian sources the second is a series of practical undertakings with which one may internalise and apply those findings.  But as well as being a helpful follow up to her earlier study, Gwenevere and the Round Table also stands on its own as a remarkable synthesis of the folkloric and spiritual worlds.

Berg deftly illustrates how the Round Table revolved around an actionable fellowship, one with its own set of sacred rites and intrigues.  The legendary table, a dowry gift to the British people and its mysteries, becomes a sacred herald to the five faery kingdoms, each offering a spiritual guide to seekers and practitioners, or sources of new information to mythographers and historians.  This table, not only a meeting place of equals, becomes a pentaprismic porthole to both the mythological past and the folk-soul future.  It weaves a set of new possibilities from the age-old Arthurian loom, many of which are to be pondered for the first time.  It presents a well rendered series of meditations, exercises, visualisations and rituals that will transport the eager reader beyond the mere fantasy of most faery explorations to a realm that is feasible and applicable to daily living.  Fellow Arthurian expert (and future Skylight author), Steve Blamires, describes it thus:

“This is an important book. Wendy Berg has accomplished a remarkable feat by recognizing a previously unnoticed aspect of the much-written about and much-examined Arthurian Tradition. After centuries of laying in the background the significance of Gwenevere and the Round Table have at last been convincingly brought to the fore to reveal their true worth. But this is no academic hair-splitting of old or outdated material. Their relevance and power are clearly shown to be of great need in the troubling first decades of the 21st century. By asking two simple questions, “Why did King Arthur with all his castles and lands need a new table?” and “How do Queen Gwenevere and the ladies of the court manage to influence the events that seem to be dominated by the knights?” Wendy Berg shows that the real power-wielders at the Court of King Arthur were the Faery women often portrayed as no more than the pathetic ‘damsel in distress’ or the ineffective, barren Queen who is no more than a romantic attraction for the casual reader. Whereas the main focus for mystics and magicians alike has always been the Holy Grail, Wendy Berg now draws our attention to the previously unrecognized complex and deeply powerful Mysteries of the Round Table. This contribution to the on-going practical work of the Arthuriad will be of great importance to not only Grail-Seekers but anyone interested in the Arthurian legends, the Western Mystery Tradition, Faery lore and the vital role of women in the Mysteries today.”
– Steve Blamires

The book is is available from various retail outlets such as Amazon, Amazon UK, Waterstones online, or direct from the Skylight Press website.

4 Responses to Gwenevere and the Round Table by Wendy Berg