Scourging and Buffeting: Jurors in the Court of Torture and Blame! 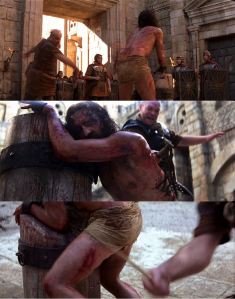 Anyone who has seen Mel Gibson’s films will know that he is quite fond of accentuating torture scenes – almost to the point of fetishisation.  Whether it’s Detective Riggs, William Wallace, or an emaciated Jesus Christ, we have become accustomed to mental and physical anguish getting centre stage in many of his films.  The Passion of the Christ received particular attention for its eroticised portrayal of torture and the implied complicity of the Jews instead of the Romans.  But if one were to look closely at its antecedent on the ancient stage, specifically in the mediaeval Passion plays, one would find that Gibson is just part of an age-old tradition.

Although the mediaeval public would understand the salvific motives behind the Passion plays, any would-be dramatist worth his salt would seek to accentuate the story with new dramatic intrigue and fresh cultural persuasions.  The canonical sources for the trials of Buffeting and Scourging sections of the Passion plays are immediately problematic for anyone wanting to construct a single coherent narrative and an orderly sequence of events.  In the Towneley Cycle, the dramatist follows the gospel accounts of Matthew and Mark in Jesus’ affirmation that he is the “son of man,” the blindfolding and taunting sequence (suggested in Matthew but stated in Mark), Pilate’s ritual washing of hands (Matthew only), and the final scourging scene before the procession.  Alternately, he evokes Luke’s account with the discussion of Caesar’s power and directly quotes Jesus’ “daughters of Jerusalem” speech.  John’s gospel is perhaps the best represented with Pilate’s triple proclamation of innocence, his explanation of power and Christ’s retort, and his warning to the Jews in the face of insurrection.  But it must be said that these ‘synoptic’ threads are loose and prone to unravelling without the binding yarn of a good storyteller.  There is also the irksome fact that the gentile Romans are directly linked to the death of Christ which blots the sanctity of the future Romanised church.  What is at stake in these plays is the dramatist’s ability to recast the legend within a new cultural framework, to replace the faceless characters of scriptural accounts with new recognisable mediaeval equivalents, and to engage the audience as witnesses in a new trial in order to re-appropriate the verdict.

The “tortors” in both plays are mediaeval-style torturers that delight in their craft.  As direct replacements of the Roman “soldiers” found in biblical accounts, these cruel characters attend both the Sanhedrin and the Praetorium but as specifically Jewish.  They complain of the heartache – “mekil hart stangying” – caused by Jesus and his teachings.  Their numerous complaints – “done us grevance”, “gart us swynk”, “done mekil sorrow” – are pathetic attempts to gain sympathy and influence the court.  Their specific accusation, that Jesus “made many brall” (caused commotion) is steadily countered by Jesus’ silence and composure, which drastically undermines their stage credibility.  Similarly, the Jewish Sanhedrin is represented by the questionable characters of Cayphas and Annas  – “Gettys thou no grace from them two”  – and although these fleshy characters are suggested in separate hearings in John’s Gospel, the likelihood is that the play adheres to the account rendered in the apocryphal Gospel of Nicodemus.  Cayphas, as classic stage villain, declares himself ” a prelate, a lord in degree” but by degree is exposed as immoral and corrupt, unworthy of his position as Chief Priest.  In coddling up to their detested Roman invaders, Cayphas and his fellow Jews become morally repugnant, thus voiding their status as God’s chosen people.

For the fashioning of a new dramatic and specifically gentile rendering, the Gospel of Nicodemus (or Acts of Pilate) is a particularly useful source, written by the Roman Ananias and purportedly an official record of the trial.  This account clearly links Jesus and the Jewish prophetic tradition as specifically separate from their New Testament counterparts as represented by the likes of Cayphas and Annas.  The plays echo the gospel’s relegation of the Jews to a fickle group of turncoats, illustrated by their shameful pandering to Rome in order to satisfy their bloodlust – “Settys not a fle-wing by Syr Cesar full even”.  It is interesting to note that Jesus only answers in corroboration when the Jews utter truth, whereas he confers far more with Pilate despite the latter’s profession of “sotelty,” “falshed gyll,” and “trechery.”  The eloquent and culturally favourable Pilate seeks to befriend Jesus, issues three distinct attestations to innocence, and even acknowledges his group as a bone fide “christen” sect.  When Jesus refuses the normative recourse to mercy, setting Pilate’s power at “noght,” Pilate obliges the messianic quest by delivering him to his divinely mandated destiny.  The Scourging play echoes the Gospel of Nicodemus in that Pilate fulfils a silent contractual obligation and thus gains absolution from associated guilt.  The ritual washing of hands and the final delivery of Jesus to the Jews – “take him emangs you all” – is the cultural transference of blame by which the Gentile/Roman world is free to assume the mantle of the elect.  The Gospel elevates Pontius Pilate to a martyr and a saint within the Coptic and Byzantine traditions.  His execution prayer is particularly telling:  “Lord, do not destroy me with the wicked Hebrews for it was through the lawless nation of Jews that I raised my hand against you.”  Legend has it that an angel caught his head from the block, as Rome flourished and Jerusalem was razed to the ground.

The violence in the play is in keeping with all the favourite mediaeval pastimes such as jousting, hunting, tournaments, bear-baiting, cock-fighting, ritual torture, and pubic executions.  The erotically charged beating of a passive naked body would naturally engage the voyeuristic tendencies of a mediaeval audience.  Actively engaging in the scene, such an audience would become activated in a Eucharistic participation of sorts, where the broken body and blood is shared in a festival ritual.  This cultural shift from Roman execution to Christian mass is remarkably subtle, as is the recasting of trial scenes in mediaeval legal practices.  The professed crimes of witchcraft, sedition, heresy, and violation of the Sabbath can be retrospectively dismissed in an errant trial devoid of proper witness representation.  The insults aimed at Jesus rebound on those that deliver them; the buffeting and scourging is now inverted.  The cries of “illa hayl” (unlucky), “harlot” (rascal), “wolfshede” (outlaw), “vile fatur” (impostor), and “fundyling” (bastard) now transfer to the new “king Copyns” of the story, the evil Jewish accusers.  The bystanders, audience, and even we ourselves as contemporary gentile readers of the Coliphizacio and Flagelacio, must face the contractual obligations of this cultural legacy.

Quite simply, the dramatist seeks to ensure that such voyeuristic witnesses become liable jurors in a new court of law – and as such are we cast in our modern cinematic equivalents.  What say ye?