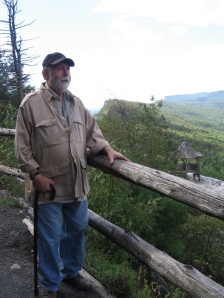 Born in London’s East End, Basil King endured the Blitz before emigrating to the U.S. in 1947.  By the tender age of 16 he had enrolled at the now famous Black Mountain College to study painting and writing amongst such luminaries as John Cage, Willem de Kooning, Robert Duncan, Franz Kline, Charles Olson, Robert Motherwell, Josef Albers, Robert Creeley, Ed Dorn, Robert Rauschenburg, and Peter Voulkos.  As with many of his teachers and peers, he settled in New York to the life of a painter and erstwhile publisher.  His early artwork featured in notable zines such as Yegen and Kultur, as well as illustrations in books of poetry by Allen Ginsberg, Amiri Baraka and others.  His own foray into the publishing world with Mulch Press led to such literary treasures as Allen Ginsberg’s Visions of the Great Rememberer and Paul Blackburn’s Piere Vidal, which were also illustrated by his paintings.

By the 1980s Basil King had become a stalwart of New York’s underground Art scene, painting portraits of famous artists and poets as well as unique representations of playing cards and trees.  Following a trip back to his native England, and perhaps somewhat due to being  surrounded by wonderful writer friends and a lovely poet wife, Martha King, Basil began to write inexhaustibly.  His long prose-poem work, Mirage, was met with some acclaim and was followed by 77 Beasts, Warp Spasm, and an ongoing, serialized work loosely titled Learning to Draw.  In each work the author attempts to synthesize both his artist and poet voices in new ways, often followed by a series of  readings accompanied by slides of paintings.  In years to follow his work loosed from the moorings of his abstract expressionist training and took on a new and unique aspect, showing in such places as the New York Public Library, Yale University,Wadsworth Athenaeum, Grand Valley State College, University of Kansas Museum of Art, State University of New York at Buffalo, The Poet’s House, and the Gladstone Museum of Baseball Art.

Skylight Press is pleased to present the first complete collection of Basil King’s Learning to Draw publications, previously published by a number of small presses and online zines and now compiled as a new and dynamic history of this venerable artist-poet.